I have been wanting to make a dress for Miss Magoo, but honestly my sewing skills are not that great yet, so the idea of spending a bunch of money on fabric with the chance I might ruin it doesn’t sound like a wise idea. So, I’ve been looking through clothes and the yard sale boxes, and I found a shirt to use to make her a dress.
I know it’s pretty early in my pregnancy to already hate my maternity clothes, but on the 3rd round, I’ve already spent too much time with some of them! So an unflattering maternity shirt got the axe this time!

I lined up the buttons on a dress that Miss Magoo loves with the buttons on the maternity shirt and traced it. The fact that I don’t follow patterns freaks my mom out a little bit, and if you’re a sewing expert you will probably cringe. Especially when I tell you that I did my tracing with a Sharpie marker! I think that might be blasphemy for the great seamstress!
As you can see in #3, I traced giving extra space for seam allowance, and because I wanted it to be a full skirt.
After tracing it, I cut it out, cutting through the front and back layer of the shirt at the same time, so they would match. In retrospect, I should have folded the shirt in 1/2 so that both side would match, but I didn’t think of that until after I’d cut it out.

Because of the realization on the skirt that I should have folded it in half, that’s what I did with the bodice. I went ahead and cut through both layers again, so that one layer could be a lining. I was trying to decide if I should use one of the sleeves for the back of the bodice when I realized that the collar of the shirt would work perfectly, so I cut that off and cut it to the desired width. (The only problem is that the stripes go sideways instead of up and down, but I would have had the same problem if I had used the sleeves.)

I cut 4 strips that were about 1 inch wide to make the shoulder straps. The strips were probably 6-8 inches long, I’m not sure. Putting right sides together, I sewed them and turned them (is there an easier way to do that? Because I HATE that part!). Pinning right sides of the bodice together, I almost forgot to pin in the straps, but remembered just before I started sewing. Make sure the strap is between the 2 pieces of the bodice front (touching both of the “right sides” of the bodice), and that the bodice back is also sandwiched in there, as you can see in #11. That way when you turn it right side in, it will all be right!
After sewing it, turn it right side in and press it.
Sew up the sides of the skirt, and then gather the top of the skirt until it is the same width as the bodice. Pin the skirt and bodice right sides together and sew. (Sorry, I forgot to take pictures of this part).
Since I used the bottom hem of the shirt, I didn’t have to hem the dress. I thought I was done at this point, but Miss Magoo told me it needed pockets.

So I found an old dress of Miss Magoo’s to cut pockets out of. It was pink, which is what Miss Magoo wanted, and I thought the lining was cute. I used a pocket pattern from an apron pattern I have to make this, but a simple half circle would have worked just fine.

My finished pictures are a bit rough. Miss Magoo was really excited about the new dress, and I couldn’t get her to hold still. She was all over the place! (Plus, she refused to take off her socks.)  While it didn’t turn out as wonderfully as I had envisioned, I’m happy with the fact that she loves it. 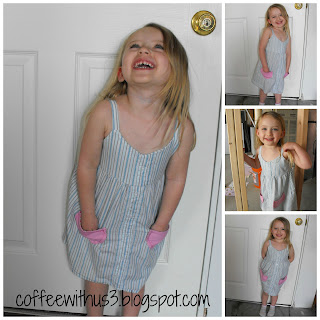 Have you ever refashioned or upcycled something?  Do you have any tips?

Miss Magoo thinks that she wants to do some sewing too, but she’s obviously too small for that! So I’m thinking about getting her this Alex Toys Crafty Fashion Show, Alex Little Hands Art Series

, so she can “make” outfits for the little people while I’m sewing.  Have you seen any other toys that would be good for her?

Check out our link parties here.

[…] It’s easy to recycle a worn, dressed shirt. And, with a bit of imagination you too can create this Upcycled Toddler Sundress from a Dress Shirt. […]

[…] a great project to take a used dressed shirt and with a bit of imagination you too can create an Upcycled Toddler Sundress from a Dress Shirt, as made by Coffee With Us […]

The Sweetheart Skirt & Tee - Coffee With Us 3

[…] planning to get rid of anyway, right? To see what else I’ve made from cast offs, click here or here. As you can see from the picture below, you just cut out 4 pieces from the pattern that […]